Bad breath, can be a major problem, one that can directly affect your personal and professional life. The good news is that bad breath can often be prevented with some simple steps.

Bad breath is caused by odor-producing bacteria that grow in the mouth. When you don’t brush and floss regularly bacteria accumulate on the bits of food left in your mouth and between your teeth. The sulfur compounds released by these bacteria make your breath smell.

Certain foods, especially ones like garlic and onions that contain pungent oils, can contribute to bad breath because the oils are carried to your lungs and out through your mouth. Smoking can also be a cause of bad breath.

There are lots of myths about taking care of bad breath. Here are three things you may have heard about bad breath that are not true:

Mouthwash only gets rid of bad breath temporarily. If you do use mouthwash, look for an antiseptic (kills the germs that cause bad breath) and plaque-reducing one with a seal from the American Dental Association (ADA). When you’re deciding which dental products to toss into your shopping cart, it’s always a good idea to look for those that are accepted by the ADA. Also, ask your dentist for recommendations.

Myth #2: As long as you brush your teeth, you shouldn’t have bad breath.

The truth is that most people only brush their teeth for 30 to 45 seconds, which just doesn’t cut it. To sufficiently clean all the surfaces of your teeth, you should brush for at least 2 minutes at least twice a day. Remember to brush your tongue, too. A lot of bacteria actually stay on the surface of your tongue. It’s equally important to floss because brushing alone won’t remove harmful plaque and food particles that become stuck between your teeth and gums.

Myth #3: If you breathe into your hand, you’ll know when you have bad breath.

Wrong! When you breathe, you don’t use your throat the same way you do when you talk. When you talk, you tend to bring out the odors from the back of your mouth (where bad breath originates), which simply breathing doesn’t do. Also, because we tend to get used to our own smells, it’s hard for a person to tell if he or she has bad breath. 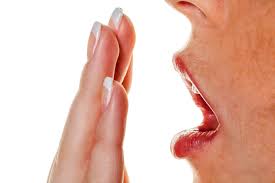 If you’re concerned about bad breath, make sure you’re taking care of your teeth and mouth properly. Some sugar-free gums and mints can temporarily mask odors, too.

If you brush and floss properly keep up with your regular cleanings, preferably twice a year but  occasionally more frequent visits are needed, especially if you have braces. But if your bad breath persists, you may have a medical problem like gum disease. Give us a call to schedule an appointment! So we figure out if something else is behind your bad breath and help you take care of it.

Proper dental care (which includes regular flossing) can do more than keep your smile pretty and healthy. A healthy mouth can also help prevent much more serious diseases,But if you’re still not convinced that you should add flossing to your daily routine, we’ve got five examples to make the case that flossing is extremely important:

#5. Flossing and Brushing Are More Effective Than Brushing Alone

These are places that a toothbrush can’t reach. And while antimicrobial mouthwash can kill the bacteria that form plaque, it can’t remove the stubborn tartar and bits of food that can lodge in these places.  That’s where floss comes in. It’s a tool specifically made to remove plaque from the tight spaces between the teeth and under the gums. The ADA suggests that flossing before you brush also helps make brushing more effective: With less plaque caught between your teeth, the fluoride in toothpaste can get to more parts of your mouth. Think of floss and a toothbrush as a detail paintbrush and paint roller, respectively. You could paint your living room walls with just one of the tools, but using them together will provide a much better result.

The places where the gums and teeth meet are where flossing plays its major role. Tiny particles of food can get lodged here, and plaque in this area will harden and over time they form tartar, a thick deposit that only the dentist can remove with a scraper. Tartar buildup can lead to gingivitis, red, swollen gums that are the first stage of gum disease. If left unchecked, the bacteria-laden tartar and plaque can spread even deeper below the gum line, causing periodontitis: severe gum disease characterized by severe inflammation and eventual tooth and bone loss.

In an era of rising health care costs and diminishing insurance benefits, it pays to take steps to reduce your medical expenses. Dental Preventive care now can pay significant dividends down the road. Also consider the point above, If your general dentists deems that the extent of gum disease would be better treated by a specialist, your coinsurance might be higher at the specialists’ office.

Tooth and gum disease can have effects that go far beyond discolored teeth, discomfort or bad breath. Extensive research has shown that the bacteria that flourish in an unhealthy mouth can harm the rest of the body, leading to heart disease, diabetes and respiratory illness. This is such a significant issue that, in 2003, the Centers for Disease Control and Prevention (CDC) began calling for public health initiatives to address oral health as a step toward addressing these potentially life-threatening systemic diseases, conditions that affect multiple organs and body systems.

#1 Preventing the build up of tartar, makes your 6 month check up and cleaning a breeze!

Few parts of a regular dental visit are as uncomfortable as the scraping the dentist or hygienist must do to remove tartar. Tartar is a hard buildup of plaque that forms around the gum line. Once it’s there, it can’t be removed without professional help. But thanks to floss, health-conscious individuals have a powerful tool to fight this stubborn problem.

Flossing allows you to remove the plaque that causes tartar while it’s in its early form: sticky, but soft and pliable. Since plaque doesn’t harden into tartar until it’s been undisturbed for a period of time, regular flossing can keep buildup from happening.

Dental cavities and tooth decay is one of the most common medical conditions experienced by Americans and the single most common disease of childhood.

Cavities are the result of gradual tooth decay caused by the build-up of plaque and breakdown of protective enamel. Initially cavities are painless, but they open the tooth up to infections, eventually exposure the nerve resulting in pain. The internal structures of the tooth can also be destroyed, ultimately causing the loss of the tooth. While this might not seem important in “baby teeth” as they are going to be lost anyway, infection can cause damage to the growing teeth and subsequent treatments can be painful and expensive.

Overall, oral hygiene is an essential component of one’s health. Researchers from the American Heart Association recently shared findings that professional dental care can reduce the risk of heart attack and stroke. Experts tracked 100,000 people for an average of 7 years in Taiwan. They found that those who had their teeth professionally cleaned at least once every two years were 24 percent less likely to have a heart attack and 13 percent less likely to have a stroke.

Regular dentist visits and oral hygiene reduces the growth of inflammation-causing bacteria that causes periodontal disease. However, these bacteria can also cause inflammation of the vessels, with studies showing that these bacteria are associated with elevation in C-reactive protein, a marker for blood vessel inflammation.

Dental health should begin in childhood as even babies are susceptible to cavities. Most children get their first tooth around 6 or 7 months of age and dental care should begin promptly thereafter with a visit to the dentist, as well as, regular tooth brushing. One major risk for early childhood cavities is consumption of sugary liquids, particularly allowing your child to fall asleep with a bottle of juice or milk.

The extended contact with sugar increases the rate of tooth decay. Avoiding sticky foods and frequent snacks are other strategies to ward off cavities. Instilling these routines in childhood promotes their continuation into adult life and with more studies showing broad health benefits from dental hygiene it is essential.

So don’t forget to schedule your six month check up and cleaning!
Call our office today for an appointment.

Most of us start out with sparkling white teeth, thanks to their porcelain-like enamel surface. Composed of microscopic crystalline rods, tooth enamel is designed to protect the teeth from the effects of chewing, gnashing, trauma and acids caused by sugar and other foods. But over the years enamel is worn down, becoming more transparent and permitting the yellow color of dentin – the tooth’s core material – to show through.

Some foods and drinks such as coffee, tea, wine or certain vegetables, tobacco use, poor dental hygiene, illness, some medications and advancing age can all contribute to noticeable tooth discoloration.  By making some minor lifestyle changes you may be able to prevent this. For instance, If you’re a smoker or a  regular coffee drinker you may  consider cutting back on caffeine or tobacco- or quitting altogether. Getting regular dental cleanings by a trained dental professional will also remove surface staining and plaque from accumulating in your teeth and gums dulling your pearly whites.

However, for a more drastic, noticeable and quick improvement, an in-office teeth whitening procedure may give you the results you’re looking for.

At DentAlign Studio, Dr Scopu uses the latest state of the art teeth whitening procedure with the EZlase™ System. This procedure is one of the most advanced teeth whitening systems available to dental patients.

Ezlase™ is an advanced laser technology developed by BIOLASE Technology, the leader in dental lasers for over 20 years. EZLase™ Laser Teeth Whitening is one of the most advanced teeth whitening systems available today.

Laser teeth whitening is safer, longer lasting, and can whiten teeth that are severely discolored. This treatment works for patients with difficult to whiten teeth, stained teeth and the most challenging shades to treat: grey and brown. This laser whitening procedure takes less than half the time of other in-office methods and unlike other whitening systems, it does not use UV lights.

You are only 20 minutes away from a bright beautiful smile, call our office today for an appointment.